It seems like Star Wars is everywhere these days.  I’ve always been a big fan and it didn’t take long for my two young children to fall in love with nearly everything Star Wars.  If you have a young Jedi in your family looking to transform their bedroom or play space, but don’t want to commit to a major interior overhaul.  Fret no longer.   Take a journey though my Kids’ Bath and  Boy’s Bedroom to a galaxy far, far away, and gather a bit of inspiration for adding Star Wars to your young fans’ bedrooms, playrooms and beyond (without a major financial or time commitment!)

The Kids’ Bath was transformed with the addition of a high impact shower curtain.  The curtain was not only easy to install, but it will be very simple to remove and replace with a new style when tastes inevitably change. Before the shift to the dark side, the gray, black and blue tones of the existing finishes provided a neutral backdrop for any accents, but once the large image of shower curtain was introduced, this color palette became a significant part of the Star Wars design.  As my daughter noted, even the existing radiator now looks like part of the design.  Character artwork that my children collected at Star Wars Day last summer and Star Wars themed wall decals provide additional accents in the room as well as allow the children to be more involved in the designing of their space.  Thanks to the existing finishes, the total cost for the quick transformation was about $80.

When we first moved into our current home, my son was was confronted by a bright aqua bedroom.  It took quite a while to convince him that “black with skulls” or “lava red with bananas,” while creative design moves, were not paint colors or themes that would make for a pleasant space.  Not wanting to invest too much money or time into refinishing a room for a five-year-old boy who’s interests and passions seem to shift every six months to a year, we agreed on a neutral, but masculine(!), gray backdrop.  We really lucked out in finding a full can of the same pale gray that was used in the Kids’ Bath (Pittsburgh Paints “Gray Marble”), a light neutral color, that could easily tie into a Lego, Minion, superhero or Star Wars theme – all his current interests.  However, after the Bath makeover, Star Wars seemed inevitable.

Once the room was changed from aqua to gray, we selected one wall to become the accent wall.  Still set on very dark colors, my son agreed to the darkest of blues and once he settled on Star Wars, we new we had to go big with a galaxy far, far away.  After painting the wall indigo (2 coats Benjamin Moore “Indigo” 6531), we placed a few spacecraft decals on the wall.  (We upgraded to a larger Death Star decal since, with the Star Wars Bath right down the hall, we actually had use for a smaller Death Star too.)  The extra character decals were used throughout the bedroom on the gray walls which allowed my son to get more “hands-on” involved in the designing and personalizing of the space since he did not participate in the actual painting. 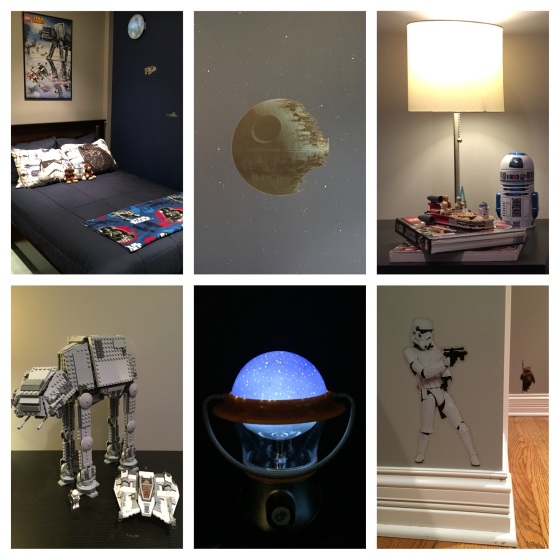 Our significant Star Wars Lego collection serves as artwork in the room, including the large framed Lego Empire Strikes Back poster that was included in the AT-AT Walker set.  Other special items include a Storm Trooper helmet and a unique print by artist Dave Dorman that combines my son’s love of Star Wars with his passion for everything Avengers.

In need of a new night light, my son found the Moon In My Room to be a perfect addition to the galaxy feature wall.  It functions as a timed nightlight with a remote and can be set to various phases of the moon.  Using a white paint pen, I spent 5-10 minutes adding stars to the sky.  I found that a mix of small dots (just the tip of the pen) and dots about the size of a pencil eraser added noticeable depth to the painted wall.  The next step may be adding glow-in-the-dark paint to the most prominent stars, but for now a starry night lantern provides “glowing” stars and a bit of fun.  Thanks to my son’s existing Star Wars Legos, toys and miscellaneous accessories, we were able to completely transform his plain bedroom to a galaxy far, far away for under $100.

One thought on “In a Galaxy Far, Far Away”